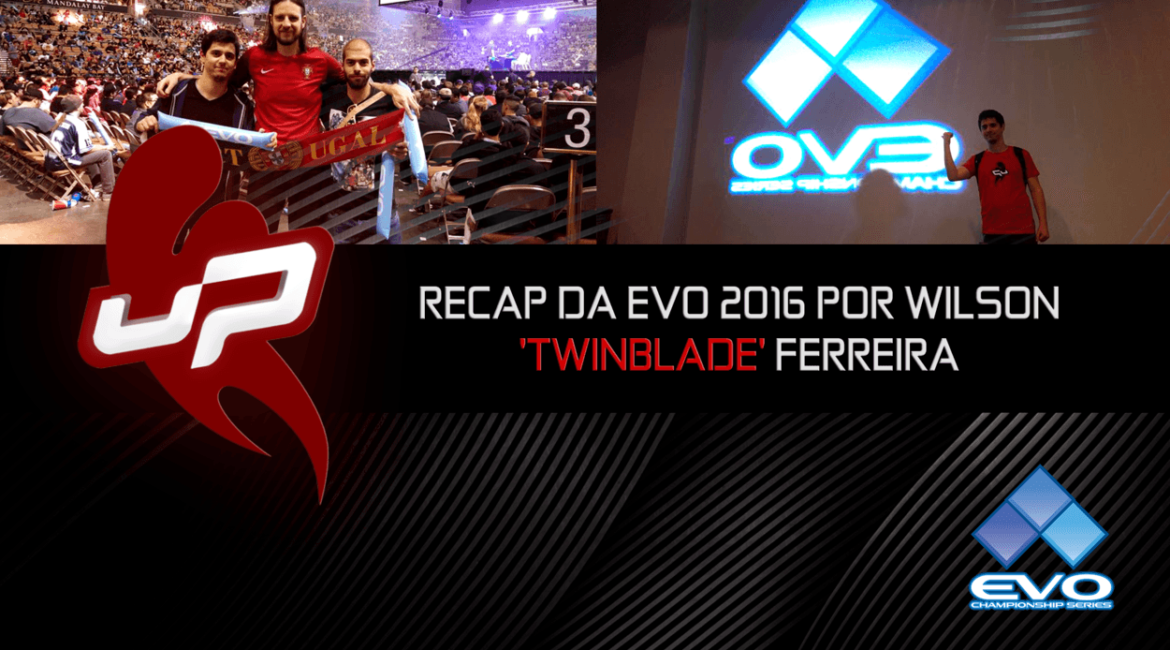 The EVO (Evolution Championship Series) is the largest fighting games tournament in the world. A Tournament where history is made, where expectations are the highest, with the most hyped moments, the best players in the world and the largest prize pools. It is the tournament that every player and fan of fighting games participate or attend religiously. This year, it finally had Portuguese competitors!

I (uP | TwinBlade) and two other members (Alvin and Obake) from PTFighters, the Portuguese fighting games community (www.ptfighters.com), set out for Las Vegas and went from spectators to participants for the first time.

Similar to previous years, this EVO had several fight games in the tournament. Super Smash Brothers 4 / Melee, Pokkén Tournament, Mortal Kombat XL, Killer Instinct, Guilty Gear Xrd Revelator, Ultimate Marvel vs. Capcom 3 were some of the games with more adherence, but none compared to Street Fighter V’s over 5000 participants, establishing a record in an EVO tournament.

After a week of exploring Las Vegas and some practice in the hours we spent in our apartment, we were ready for three intense days of EVO. Arriving at the Las Vegas Convention Center, we were able to observe thousands of people already present. The room would fill even more throughout the day. Among the crowd (and during the whole weekend) we saw several familiar faces that we usually only see in streams, such as Tokido, Momochi, Fuudo, Infiltration, Justin Wong, LI Joe, Alex Valle and, of course, Daigo Umehara.

The first two days were intended to solve all the matches until the eight finalists of each one were determined. We already knew how difficult it would be to get out of our pools, given the size of the SFV tournament and all the world’s “sharks” looking for a top 8 place. However, I did a good performance during my pool and managed to get on the winners bracket, after defeating an American Necalli player in the final.

The next day I had my second round of pools. It was at that time that the competition became even more lively. In the first match I played against a Cammy who made several mistakes in the match-up against Nash (my character), of which I took advantage. I won this fight and made the bracket.

The next fight would be against a Mexican player, which also sported Nash. We took the set until the last round in a very balanced match, but I ended up being caught by a wake-up V-Trigger that gave him the victory.

Already in the bracket losers, I played against Souji, a Japanese Dhalsim player. Unfortunately, it’s not a very common match-up here in Portugal and I ended up losing not only because he played a lot better, but also due to inexperience against his character. My final result was a very positive 193th place in over 5000 players, which I confess I was not expecting to get in a first EVO participation.

The main event would be the top 8 of Street Fighter V, which also had the right to broadcast on ESPN, an accomplishment for the future of eSports. The rest of that day was followed by combats of top players, which were in a completely different level. At the end of the day, all eight finalists were determined for each Sunday game to be held at the Mandalay Bay Events Center, one of the largest Las Vegas Hotel / Casino. Throughout the day we saw the finals of various games. The atmosphere of this live event is simply phenomenal.

In the top 8 of Street Fighter V there was only one American player, LI Joe. It was amazing to see the American crowd cheer for LI Joe, as well as see the reunion with his father after the victory over the Japanese player Eita. The crowd went wild whenever LI Joe was on the stage, undoubtedly the most hyped moment and player in the entire EVO. After his defeat (which left him in 5th place), LI Joe addressed the audience with some emotional words, which earned him a chilling ovation from the whole arena.

The EVO trophy ended up going to Infiltration, which defeated Fuudo (both champions of past editions), coming from the bracket losers, in a confrontation between Nash and R.Mika, respectively. You can watch the replay video of the Street Fighter V final.

It is impossible to describe everything we have seen and all the moments lived on this trip, but I can say that it was totally worth it. If you are a fan of fighting games, EVO is the tournament where you need to go at least once!

For videos and photos check out the PTFighters Facebook page. This is also a good time to meet the Portuguese fighting community and to appear in the regular tournaments we do in Porto and in Lisbon. In addition, our major tournament Lockdown is already in September and is part of the Capcom Pro Tour!  Don’t miss it!

The Grow uP Gaming Association appreciates the time made available by Wilson ‘Twinblade’ Ferreira in this recap, in which the idea was to get an in-depth understanding of what the Evolution Championship Series is. We also encourage you to invite all the fighters to follow the PTFighters page. See you on Lockdown 2016.